发布日期：2022-02-01 11:04
(31 Jan 2022, Beijing) - China in January posted an 8.1 percent GDP growth in 2021, defying market expectations and further cementing the world's second-largest economy's leading position in the global economy's recovery from the still raging COVID-19 pandemic, as major growth drivers, particularly exports, saw remarkable improvements in the face of mounting global challenges.
However, a significantly slower GDP growth of 4 percent in the last quarter of 2021, the weakest since the second quarter of 2020, also offered sobering reminders of the growing downward pressure on the Chinese economy, including from shrinking demand, supply chain disruptions and weakening expectations, in addition to risks of the spread of the Omicron variant.
Chinese economists noted that China is still positioned to tackle those challenges, given the solid foundation of the Chinese economy and sufficient fiscal and monetary tools at the disposal of policymakers, who are already moving to boost consumption, liquidity and other issues. Despite risks, some economists are expecting 5.5 percent growth in 2022, while others as low as 4.5%
China's GDP expanded 8.1 percent in 2021, growing the fastest in nearly a decade and landing well above the government's annual target of achieving a growth rate above 6 percent.

The robust expansion, which beats market expectations and eclipses most of the other major economies in the past two years, spells out a steady economic recovery path - building upon the country's zero-tolerance epidemic strategy that Beijing has been relying on despite criticism from the West and headwinds throughout the year, which ranged from sporadic coronavirus outbreaks, woes in the property sector, bulk commodity price hikes, to a power crunch.
The country's total GDP in 2021 reached 114.37 trillion yuan ($18 trillion), according to data released by the National Bureau of Statistics (NBS) on Monday.

This represents an increase of $2 trillion compared to 2020, or roughly the equivalent of Italy's GDP in 2020 based on Global Times calculations. 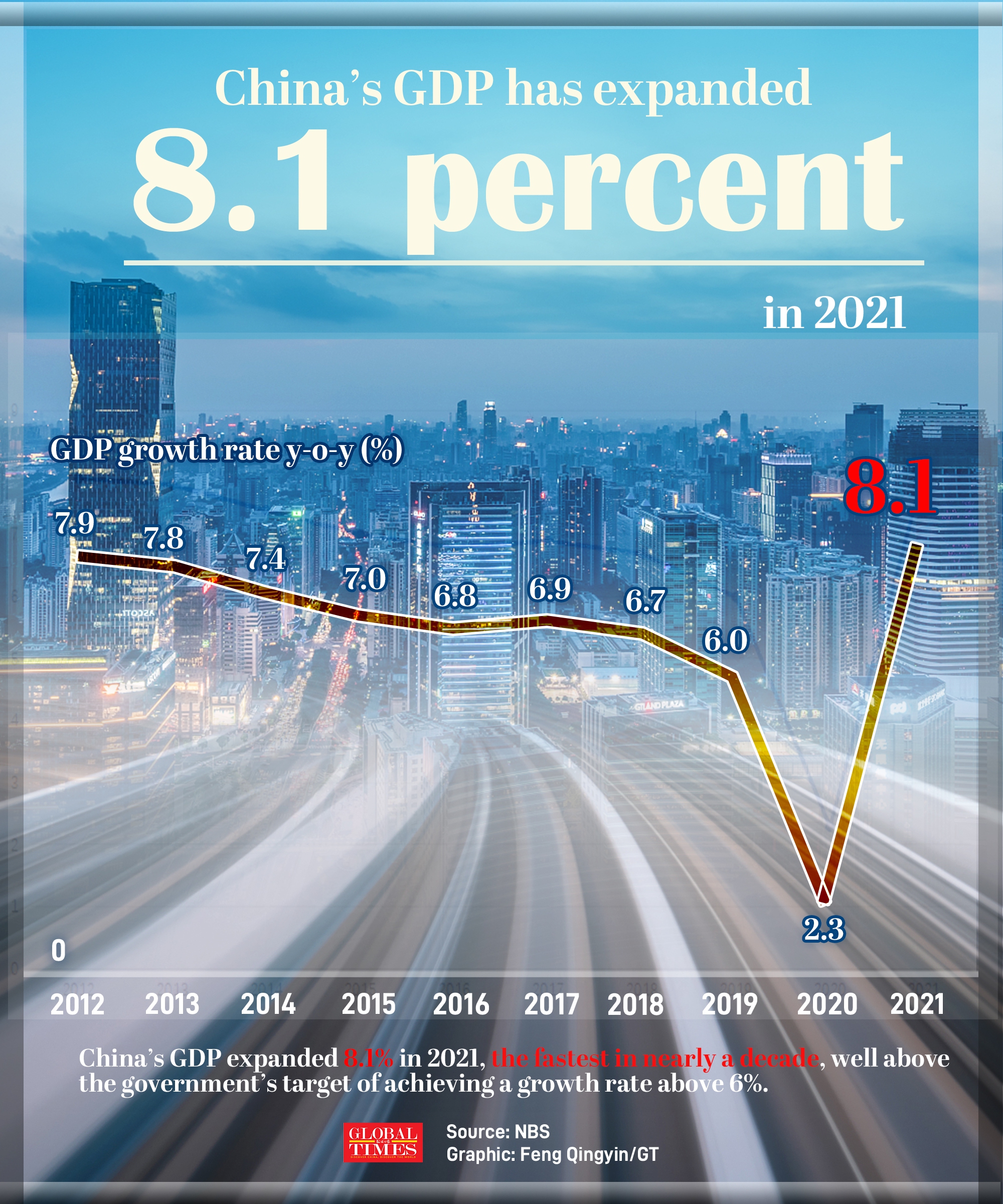 In the fourth quarter of 2021, China's GDP grew at 4 percent, beating estimates that growth in the quarter, marred by epidemic flare-ups, rising commodity prices and electricity shortages, would fall below that mark.

Despite being the slowest growing quarter for the year, there was quarter-to-quarter growth and the growth was achieved on top of a 6.5 percent growth in the fourth quarter of 2020, analysts said.

China's fourth quarter GDP data is also likely to be better than the US' numerically, analysts pointed out, predicting US GDP from October to December to be no more than 3 percent due to runaway inflation that rose to 7 percent in December, the fastest since 1982, that offset much of the growth.